Surprisingly, Wildfire Alliance has its origins in the produce business. In the 1980s, our Chief Technology Officer, Jim Aamodt, patented the first produce misting systems now in wide use in grocery stores around the world.

Meanwhile, from his perch along the Columbia River, he could see fires popping up in southern Washington and northern Oregon, both heavily forested areas. He found himself fighting to protect property on a regular basis. His nephew, who was assisting in fire-related search and rescue operations, had the idea of taking those same misters that had been so successful in grocery stores and putting them around the roofline of homes where they could be triggered to soak the house and landscaping when a fire was approaching.

Unfortunately, they found that spray systems had two shortcomings. First, a wildfire can destroy everything in its path, including power lines. When the power goes out, the pumps that power the misters stop working. And second, when a fire is approaching, fire departments often cut the supply of water to homes in order to preserve enough pressure for them to fight the fire.

Where there’s a will, there’s a way, and Jim found a way around both issues. He developed systems that were independent of water supplies, using the same fire retardant, PHOS-CHEK®, he saw being dropped from planes (minus the pink). He also used compressed nitrogen that, when triggered, would push the retardant into the misting system without the aid of an electrical pump. Jim signed an exclusive contract with the manufacturer of PHOS-CHEK® for use in homes, and a new business, Firebreak Spray Systems, was formed.

After Firebreak began installing systems on homes, the company garnered a large amount of local and national media coverage. That, in turn, caught the attention of a major insurance provider, who asked them in 2003 to install spray systems at their cost on their high-value homes. Two years later, the insurance company called about a fire already underway in eastern Washington and asked if Firebreak could skip the system installation and just spray around the homes in the path of the fire. Not surprisingly, it worked – the fire was stopped in its tracks and the homes were saved.

With that proof of concept in hand, the insurance company funded a significant expansion of the business, buying equipment and staffing response centers in the LA and San Francisco Bay areas. When a fire was spotted, the trucks rolled, and homes were sprayed. This particular approach was particularly appreciated by local fire departments. By pretreating homes ahead of a fire, Firebreak’s personnel and trucks were in and out well ahead of the fire and were not in the way of firefighters when the embers and flames arrived.

By 2007, Firebreak had expanded to 18 trucks and more than 90 employees throughout the West. Most famously, the company that year sprayed a number of homes in the path of the devastating Witch Fire near San Diego. After the fire roared through the area, the insurance company dispatched a drone to see how their properties fared, and they confirmed 17 saves representing over $150 million in property value. 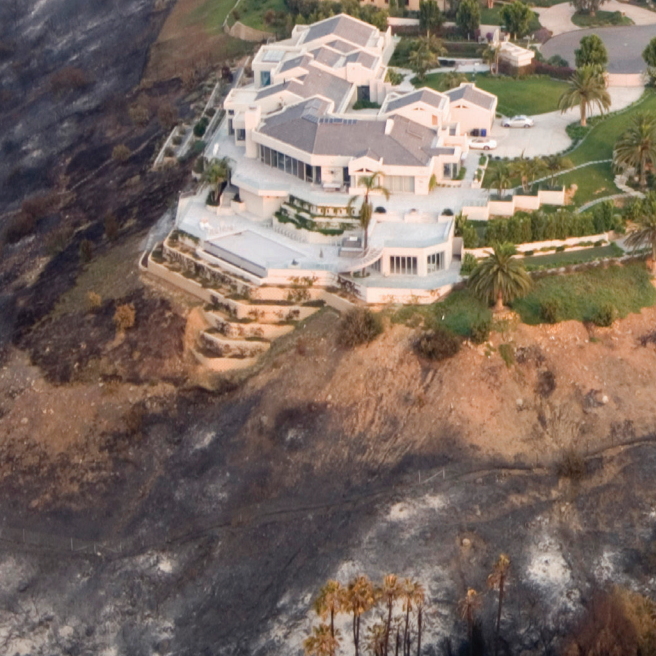 As the business expanded, Jim started experimenting with ways to improve fire retardants in a home environment. Fire retardants are basically phosphate-based fertilizers, but in order to work in planes and helicopters, a number of other ingredients were added to protect the aircraft. Jim realized that none of these were needed in a residential application. By removing these extra ingredients, he developed a formula that would be less toxic yet still as effective.

Over time, the company enhanced efficiency, realizing that buying, maintaining and dispatching what were essentially small fire trucks (painted red, lights and sirens, big hoses to spray retardant around homes) was a bit of over-kill. The same impact could be had with smaller equipment, even a backpack sprayer. Jim also knew that the retardant could be sprayed well ahead of fire season and would remain effective until washed off with water.

Now, the company has become a collaboration of insurance companies, semi -independent certified installers, fire departments and customers under a new name, Wildfire Alliance. Assembling a workforce of trained and certified technicians working with backpack sprayers, the company is able to offer services formerly available only to the wealthy. The company added a certification program, assuring insurance companies the job was optimally completed and thus enabling insurance rebates, discounts and other subsidies.

Jim continues to innovate. By adding ingredients to supplement PHOS-CHEK retardants, he is making them even more effective and longer-lasting. One of them is a deliquescent formula, which pulls moisture from the air and retains it so that plants don’t dry out as quickly in high-heat situations. The other is a compost accelerator, which speeds up the normal decay of dead branches and leaves into dirt, thereby reducing the amount of fuel available to catch fire. These innovations are all high-purity, non-toxic and nonpolluting, making the mixture safe around children and pets. Together they provide multiple lines of defense against embers that might otherwise ignite vegetation and spread quickly around a property.

This site uses third-party website tracking technologies to provide and continually improve our services, and to display advertisements according to users’ interests. I agree and may revoke or change my consent at any time with effect for the future.
More

This tool helps you to select and deactivate various tags / trackers / analytic tools used on this website.